That Christians and Muslims in Cyprus once lived in relative harmony

When I asked the elderly subjects I was interviewing for this project ‘to tell me the truth – about how they co-existed with Turkish Cypriots on the island?” they all announced quite convincingly that Muslims and Christians were always friends. “There weren’t any problems,” they remarked. “We talked together, laughed together, ate and drank together, worked together, looked after each other’s properties when required and even celebrated village events together. The only difference was that we went off to a church to pray and they went off to a mosque. Even a lot of our customs were similar. They even spoke the same language as us – with the same dialect.”

I soon began to see a clear picture emerging that my parent’s generation did not have any ill feelings or thoughts towards their Muslim counterparts. This was quite a revelation. Many of the people I interviewed (some aged in their late 80s) expressed deep regret and even anger when recalling how the political opportunists and social agitators after 1950 seeking union with Greece – started to stir the pot of discontent. In fact, they created the pot. These agitators started a campaign of hate, lies and fear across the island in order to change public opinion about the Turkish Cypriot minority that lived on the island. Their mission (it appeared) was to fracture and eventually ruin the relationship between the Christians and Muslims.

Remember, I wasn’t there at the time and I am only basing these views on the recollections of about 25 immigrants in Australia who were actually there. I would be very interested to see if these views are shared by the majority of Cypriots who remember a past before 1950.

Remember also, that my primary objective for conducting each interview was to gather information about people’s lifestyle, habitat and culture as it existed from the first half of the 20th century. I have therefore, decided to avoid discussing politics or events that followed Cypriot Independence in 1960 or leading up to the Turkish invasion of 1974. Inevitably however, when discussing Christian and Muslim relationships on the island, many of my interviewees were anxious to explain to me their horror and out-rage of having to witness their Muslim neighbours been forced out of their ancestral homes by young thugs with guns. In most cases, these recollections were shared with me with wet eyes and audible sobs.

It may also interest you to know that in early 1974, before the invasion, I was attending school in the village of Arsos where my teacher would often express his pro-Greek sentiments to the class about ‘enosis’ or union with Greece. I would sit silently and watch (in confusion) as this man kept reminding the class over and over again that the Turks were our enemy.  So that’s how the young get indoctrinated. When I finally gained the courage to question his ideology – he looked at me in an expression that could only be described as a mixture of anger and dismay and shouted, “We are Greek – be belong to the motherland.” Well I don’t have to tell you how well that ‘frame of thinking’ turned out for us. 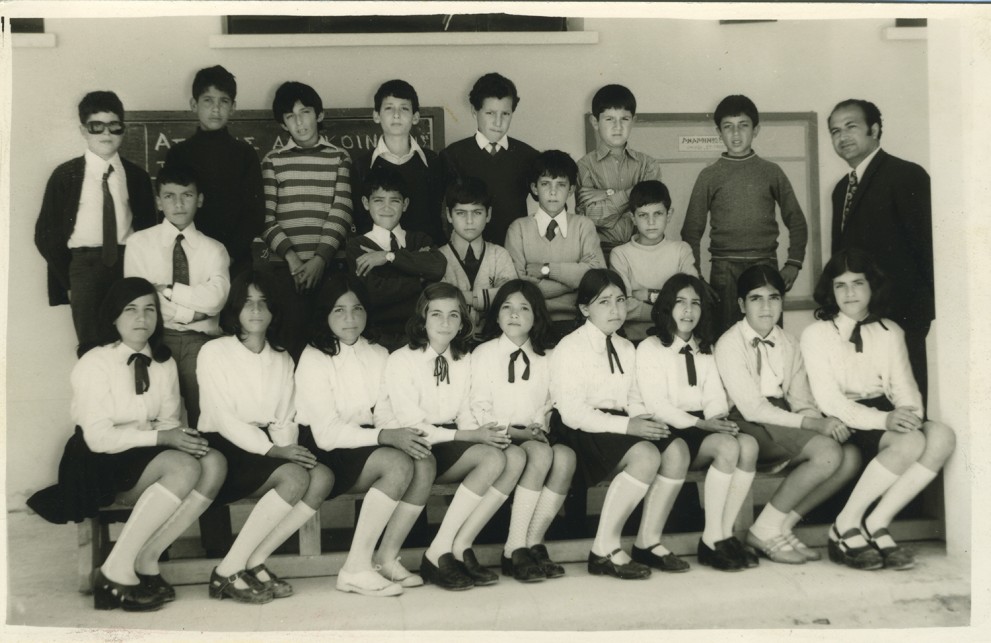 That’s me above in my class of 1974 with the striped jumper.

So it comes as a great relief to me today – almost 40 years after my sensitive classroom adventure in the village of Arsos –  that I can now documented such fond memories and expressions of genuine care (and gratitude) from my cohort of elderly Christian Cypriots towards their Muslim brothers and sisters.