Children in the old days were better prepared to cope with the world around them.

Once again, the information presented here, is based on recollections of elderly Cypriots whom I interviewed as part of the research for my ‘Tales of Cyprus’ project. These interviews included a series of questions examining ‘the world of the young child’ growing up in Cyprus during the 1930s and 1940s or around the time when my participants would have been aged between 5 and 15.

The most startling revelation revealed by the people that I interviewed was I guess – the notion that young people in the village were expected to help the adults with the daily chores which, depending on their gender might range from washing, ironing, cooking, cleaning, sweeping, feeding the animals, gathering the harvest, fetching water, sowing or sewing, picking fruit, planting, mending, fixing and so on and so on and so on.

Not many children were blessed with an education and those who were lucky enough to get one were often pulled out of school before they finished 5th grade and pushed into a life of domestic and rural chores, commitments or responsibilities. The truth be told, parents often had little choice and little money to afford the luxury of education for their children, when there was so many other pressing needs on the family farm. To our modern eyes it may look like an unfair existence or even forced child-labour but in reality, children in the village helped their parents as a means of survival. Everybody pitched in back then. Only the very young were spared that fate. Interestingly, the people I interviewed did not recall past childhoods with any degree of sorrow or regret but rather a simple acceptance that it was just the way things were back then. Such was their life and their fate.

What was most remarkable about the lifestyle of a young person growing up in rural Cyprus was how mature and capable they became as adolescents or young adults. Compared to their modern counterparts, young people were able to stand on their own two feet and fend for themselves before they reached the grand old age of 13. One woman I interviewed mentioned that by the age of twelve she could cook a number of complicated recipes, look after her younger siblings, wash and iron silk shirts and tend to the fields and livestock as good as any adult in the village. My mother for instance would help her mother bake bread for the village every day without delay or complaint. My father accompanied his father to the fields and helped thrash the wheat, sow the legumes, pick the grapes and herd the goats.

I know parents in today’s world who struggle to get their youngsters to do the simplest of chores around the house such as taking their empty plate from the kitchen table all the way to the sink. In most cases, these same parents become the enablers who do everything for their children while their ‘offspring’ laze around on their double-bed duvets, warmed by central heating with bellies full of pizza and Pepsi-max as they thumb their way around an array of mind-numbing gadgets, games and online activities. As a teacher and also as a parent I am often bamboozled by the actions (or rather inactions) of young people today. It saddens me to think that although they have more tools and resources than any previous generation they appear to be bored, disinterested, apathetic and generally incompetent with even the simplistic of life skills. My parents would often tell me that no-body in Cyprus at the time of their youth was bored or overweight. There wasn’t any time for that. They also stated that by the time you reached the dizzy age of 17 you were expected to marry, raise a family and keep a house. Although life was tough and tiring – it prepared you for the world of the grown-ups quick smart.

A few years ago, I wrote a controversial article for a college newsletter titled, “The disabled youth of today”. Controversial, I guess because some parents mistook my comments as a criticism of their parenting. Instead, my article laid the blame squarely on modern technology and our consumer-driven society for producing ‘slow-moving’ and ‘too-tired-to-think’ young people. In my lifetime I have witness a steady decline in language, literacy and numeracy amongst the younger members of society. People are now talking about the death of handwriting as we know it. Anxiety and depression is on the rise. Obesity and diet-related illnesses have increased ten-fold. Social-phobias, insecurity, low self-esteem and extremely poor communication are also modern-day curses for the young these days. Many elderly Cypriots lament how youth is wasted on the young these days. Most agree that today’s teenagers who have been force-fed consumerism or spoilt from the crib have become lazy, disgruntled, ungrateful and a discontented bunch of whingers and whiners. Bit harsh perhaps. You have to appreciate however, that the people that I interviewed remember living in a remote village in Cyprus, in a mud-brick house with no sewerage, no electricity and no modern comforts to speak of and yet were able to use nothing more than their imagination to pass the time and amuse themselves.

I can’t begin to imagine what it must have been like for my parent’s generation to wake up at the break of dawn and then face a day ahead of chores and outdoor activity before retiring wearily onto a hard bed to sleep. I believe that children of that bygone era were never really lonely. They had plenty of siblings, cousins and friends to keep them company, to play together and share their time in hours of conversation. Through my research I also discovered that many children would play traditional games such as hide and seek, skipping rope, marbles, hop-scotch and a lovely game called ‘Lin-gri’ which involved hitting a small stick in a baseball-style manner with a bigger stick. This was home-grown fun in the great outdoors.  Can you imagine that? Children playing outdoors in large groups. Incredible. Fast-forward 80 or 90 years and picture that lumpy and anemic-looking teenager sprawled on their bed with the cord of a laptop coiled around their leg as they trawl mindlessly through post after post on their Facebook wall in a desperate attempt to connect with other humans on the planet. That it should come to this. 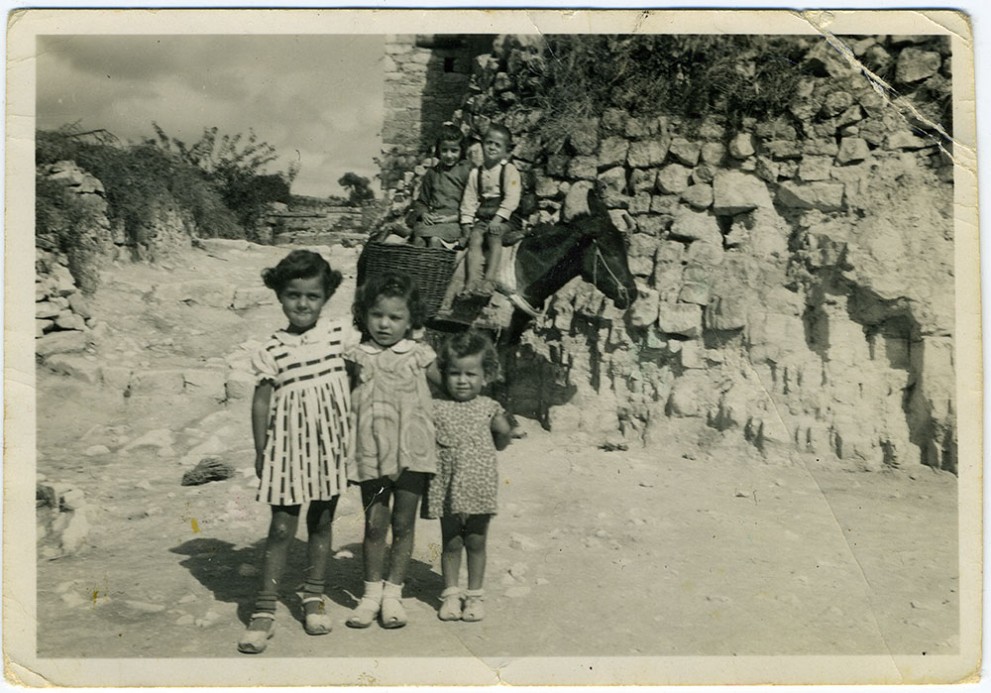 My little cousins in Mousere around about 1956 getting lots of Vitamin D.

Child rearing in the past was also vastly different to nowadays. Young mothers would always receive the support from relatives and fellow villagers. The advantage of living in such a small, close-knit community in the first half of the 20th century was that you were always surrounded and visited by people who cared about your well being and that of your family. People looked after each other with genuine affection back then. Children always had company. Despite their poverty and harsh living conditions I believe that my parent’s generation were a lot richer in family and community support than their modern-day descendants. Best of all, the children of the village lived a free-range life-style unlike the poor battery-hen existence that many young people have to endure today. I feel sorry for modern children and teenagers who live in suburbs full of strangers and miles apart from cousins or friends from school. Many of them remain cooped up in bedrooms full of gadgets and the latest technology oblivious to the outside world.

Don’t get me wrong; I am very grateful for the modern comforts of the world today such as flushing toilets and hot water but I lament the demise of spontaneous outdoor activity by our children or their stimulating face-to-face conversations.

And so I conclude with this sobering thought. When was the last time you ever heard a young person utter these words. “I’m just going outside to play?” Or have you every heard a teenager state the following phrase. “Is there anything I can do to help?” Inconceivable.