It was easier for previous generations to find someone to marry.

At the time when my father was quite young, most men were free to roam outdoors and around the countryside without question. Most women were kept indoors – hidden. When a man decided he wanted a wife – others usually found one for him. It’s true, that until recent times, nearly all marriages on the island of Cyprus were pretty much arranged by the couple’s parents (or relatives). This practice was otherwise known as ‘proxenia’. Proxenia is the name given to the act of sending messages via a person regarding a marriage proposal. In most cases, couples that were married by proxenia accepted this fate and made the most of a lifetime together. It was firmly understood that once married, you stayed together forever, till death do you part – no matter what. For better or worse.

After interviewing the descendants of that distant past, I was surprised to learn that most young couples did not really go out on dates before deciding to get married. In fact, it was the other way around. You agreed to get married first and then you were allowed to go out as a couple. There was no sex before marriage. No living together before marriage. Life together usually began with a formal introduction (with both sets of parents in attendance), and then upon mutual consent, ‘loryo’ (or word of the engagement) was announced to the entire village. A grand two to three day wedding followed soon after and then childbirth – lots of children.

A lot of the couples I interviewed had been married for over 60 years and admitted that they were very happy together. They told me that an ‘arranged marriage’ was usually based on a dowry being provided by the father of the bride. This could include anything from livestock, produce or even a brand new mud-brick house. It was interesting to note that many young couples came from either the same village or at least a neighbouring village. In some rare cases, even cousins were known to tie the knot. 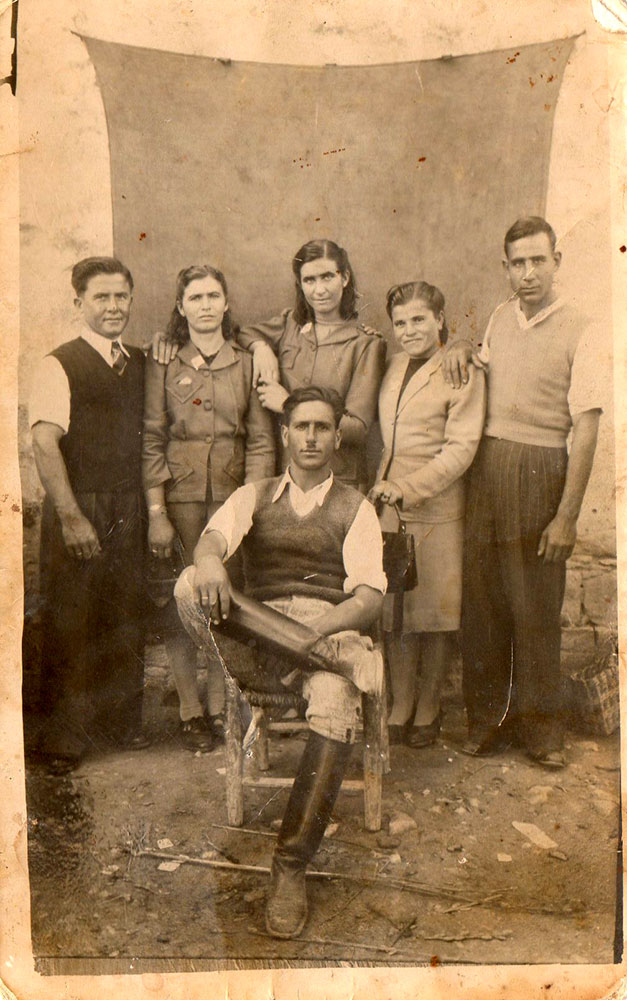 Circa around 1941. From left, Arestis Constantinou with his fiancée Tereza, her sister Maroulla, Panayiota Konnaris with her fiancée, Yiannis. Seated at the front is Periclis, who is the brother-in-law of Tereza and Marroulla.

The truly amazing fact about being born in Cyprus during the first half of the 20th century was how accessible marriage was for the younger population. Men, no matter what age or disposition would only have to raise their hand and a wife would be found and a marriage arranged. Young women usually had to wait for a suitor to come calling and if that didn’t happen by the time they turned twenty then a flock of elderly women in the village would raise the alarm and pretty soon a prospect would be found. A person left on the shelf was almost unheard of in those times. Everybody was expected to get married.

I guess for me, the obvious positive outcome of an arranged marriage was that you were given someone to share your life with. This was based on the notion that no-body should be left to live on his or her own. The negative outcome of an arranged marriage was that you could end up in a loveless relationship or with a violent and abusive partner. It was always a gamble. Thankfully, the people in my research study had mostly admitted to finding their perfect match. Okay, perhaps they didn’t use the word perfect – but by the sounds of it, they were all pretty happy with their chosen life-partners.

Upon reflection, it must have been comforting for the previous generation to know that marriage could be so easier arranged for them if they wished it so. The option to get married was always available to them and totally do-able. On the other hand, if you were born as a woman then the consequences of an arranged marriage could also be quite disastrous and drastic, depending on the ‘luck of the draw’. I know quite a few women of my mother’s generation who did not fare well in the marriage stakes. The men that were chosen for them were complete bastards. These poor women suffered in silence, putting up with no-end of physical, verbal and even sexual abuse without even a whisper of complaint. Divorce, as I found out was never an option. One of these women astounded me one day when she confessed her belief that if she suffered on earth, her reward would be greater in the after-life.

My mother’s story still blows me away. At the grand old age of 32 she was placed on a ship – on her own – to travel to Australia to marry a complete stranger. You see my father was shown a photo of my mother by a mate back in Melbourne and he decided to send word back to his village asking his parents to investigate. They keenly obliged and travelled to her village to meet the girl and her parents. Once the dowry was agreed – my parent’s fate was sealed. No sooner did my mother arrive at Port Melbourne she was married to my father at the local Greek Orthodox Church. Then couple then spent the next 50 or so years getting to know each other. Lucky for my mother, my father was a good, decent man.

As I write about these age-old marriage customs of the past, I spare a thought for the countless young people who remain unmarried and all alone in various parts of the world today. You see we live in a world today that often judges a person by their looks, bank account and/or employability. We live in a world of infidelity and divorce. A world where if the going gets tough – couples are quick to thrown in the towel and quit the marriage. We live in a world where you are expected to fend for yourself, risk getting hurt, perhaps date a thousand strangers in the hope you might find someone who really loves you. We live in a world that can be harsh and often cruel even when you muster the courage to ask a stranger out on a date. A world full of people feeling insecure about themselves with low self-esteem – where the fear of getting hurt is often greater than the desire to go out and meet someone.

It’s amazing to think, that despite all the short-comings, poverty and lack of technology in the distant past, that even the village idiot had a good chance of getting paired off. It was a simple and unabashed existence. No pretenses, no vanity, no mind games and no bull shit. Do you like someone? Good. Then that’s it – let’s book the church.